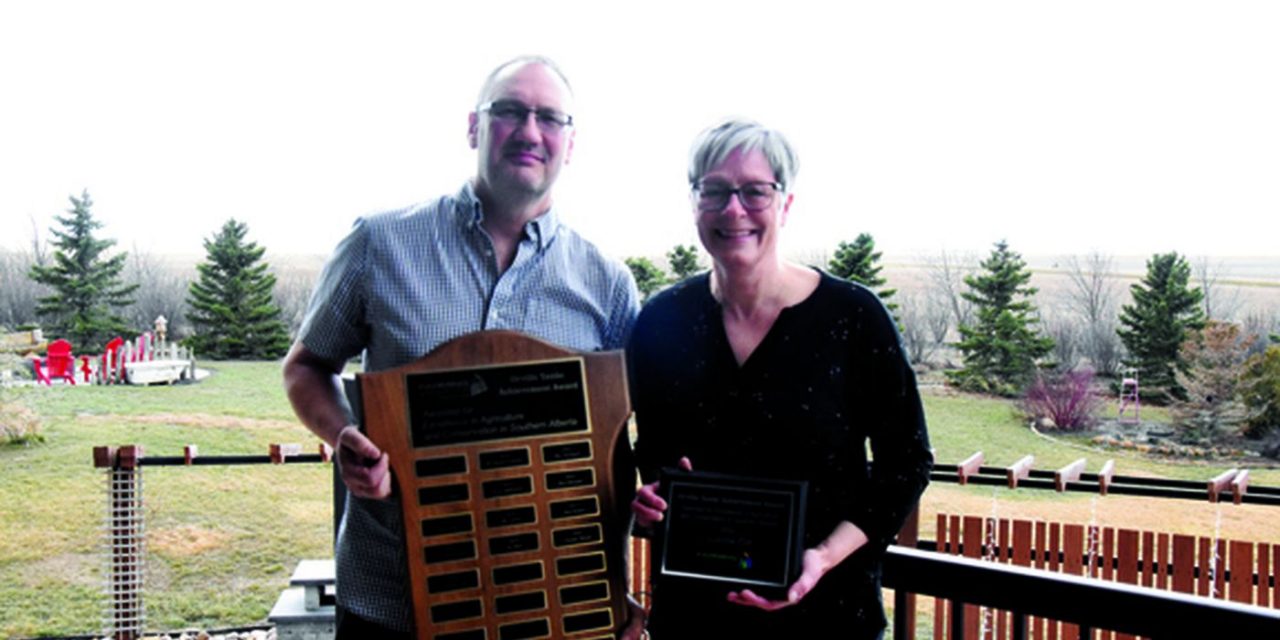 A local farmer has been named the 2022 Orville Yanke Award recipient by Farming Smarter as a result of his contributions to soil conservation.

Laverne Gill, along with his wife Launa and their children, live on a grain farm located about 15 minutes outside Medicine Hat. Both Laverne and Launa were raised on farms, but spent nearly 30 years in the Hat. In 2003, they purchased a small acreage outside the city and, eventually, a larger plot of land in 2008, which has become their permanent home.

Since then, Laverne and Launa have continuously worked to improve their operation through new technology/techniques and smart-farming practices. The Gills have adopted several techniques which not only improve efficiency, but work to maintain good soil health and reduce negative impacts on the land.

“When we moved here, the majority of farmers … were either summer-following or they would spray (the crop) and seed it one year, then two years,” Laverne told the News. “We started the trend of seeding it every year. What it does is, by not tilling, it saves so much of the moisture, you’ve actually got enough moisture there to grow a crop every year.

“Every time you till, you lose half and inch of moisture. When I was young, we’d till sometimes five, six, seven times a year, so you’ve lost three to three-and-a-half inches of moisture.”

Beyond tilling, the Gills have also adopted mid-row banding practices.

“We were probably one of the first operations in this area to do mid-row banding,” Launa said.

“It doesn’t give all the fertilizer at once,” said Laverne. “So, the nutrients are available further down the year … (The plants) have to reach for it a little bit. It’s plant food down the road, basically.”

The Gills also choose to leave ditch and grass lines untouched, as well as small portions of their fields, so to provide habitats for animals and bugs.

“We don’t cultivate absolutely every acre,” said Launa. “We are recognizing there are benefits to leaving those kinds of things.”

Many of the practices the Gills adopted aim to have a positive impact on their land.

“Our goals are to find a balance,” said Laverne. “We realize life is a balance, which includes nature and all those other things … We’re trying to find some eco-friendly alternatives to the issues we’re dealing with.”

Proponents of trying new methods and tools, the Gills encourage other farmers to embrace change. They often share their own experiences in an effort to support others, as they feel the farming community has supported them.

“Any challenges we’ve faced, we share them because we have to all work together to make it better,” said Launa. “I think it’s important we share knowledge and what we’ve tried, to say, ‘It is working. It is a good idea.’”

The Gills also express their gratitude for Farming Smarter, which provided the award.

“When we first heard about it, we were honoured to see the list of previous recipients and the things they’ve done for conservation,” said Launa.

“I didn’t feel like I was in the same calibre as those people,” Laverne interjected. “We’re trying to run our farm as a business, but a business successful in many manners.

“We want to co-operate with nature, we want to represent the farming community to city folks in a positive way. We don’t necessarily feel like we’re worthy of (the award), but it feels good.”