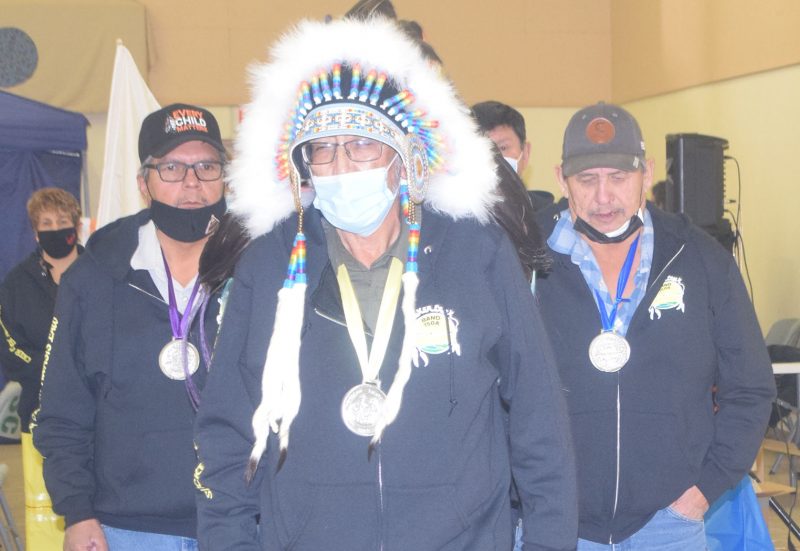 Sucker Creek is one of the first Treaty 8 First Nations to start a process to draft its own laws to protect its children.
Chief Jim Badger and the band council proclaimed the Awasis Law of Treaty 8 at a ceremony Nov. 6 at the Sucker Creek Recreation Centre.

Awisis means child in the Cree language.
“For many years, we’ve been trying to get our own child welfare legislation,” Badger says.
“We need to take entire control of our children from the Province [of Alberta].
“We need to bring our children home.”

The local event was a follow-up to a Treaty 8 Child Well Being Legislation naming ceremony July 11, site of where Treaty 8 was signed June 21, 1899.
“Things are changing,” Badger says.
“It’s something that will carry on for a long time.”

Over the next several months, the band council will draft its own laws to take over control from the provincial and federal laws.
Councillor Noella Willier says the day was monumental.
“This is important for our First Nation to bring our children home,” she says.
“By us creating our own law for Sucker Creek, we will have overall representation of our children.
“It will give us authority to speak on behalf of our children.”

Treaty 8 Urban Child and Family Services CAO Loretta Bellerose says Treaty 8 families and children have suffered for a long time by the provincial government.
“Laws have always been developed by non-Indigenous governments,” Bellerose says.
“It’s important for Sucker Creek members to develop their own law because they know the beliefs, traditions and values of their families and members.
“They have their own traditional parenting law, which is love.”

She says many government laws and programs have not supported Indigenous families and people.
“Alberta Children’s Services has been in place for decades, apprehending our children, placing with non-Indigenous families, selling our children [Sixties Scoop], adoptions, severing cultural, community and family connection that are integral to our spirit and well being as a people,” Bellerose says.

“Our families have been impacted by intergenerational trauma as a result of residential schools.
“This contributed to our family systems broken, cultural genocide, loss of identity, addictions, suicide, and many more social injustices.”

Treaty 8 is the largest Treaty in Canada and extends to British Columbia, Saskatchewan and the Northwest Territories.