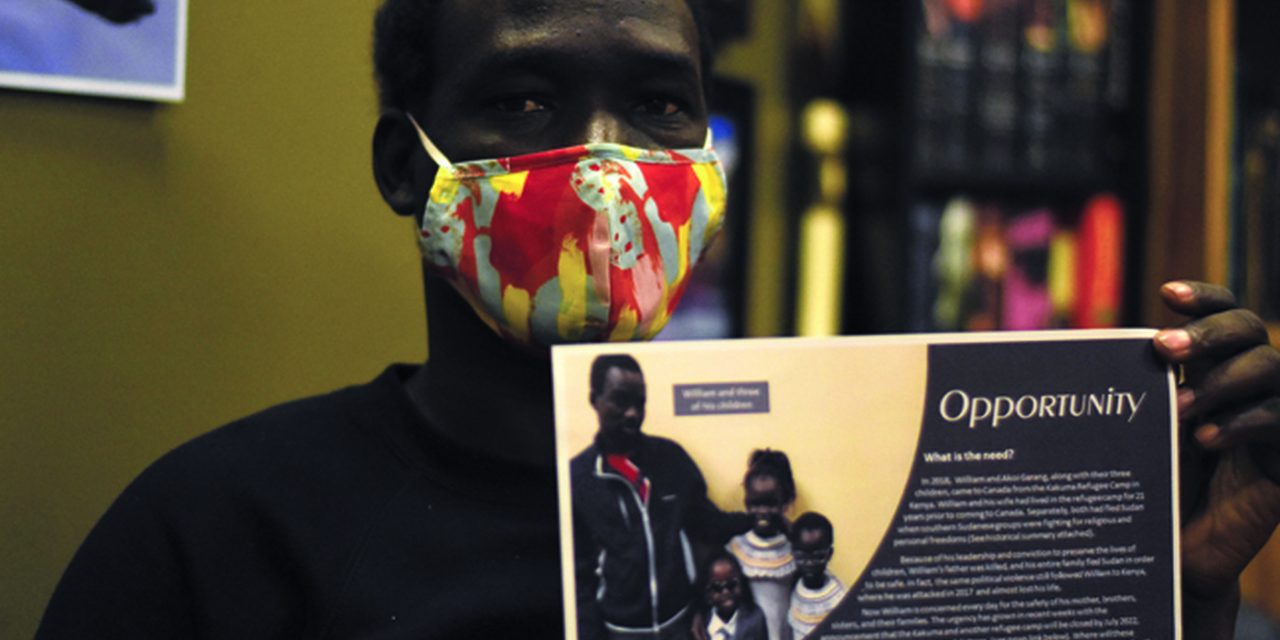 Born in South Sudan but forced to flee as a child, he has walked through Sudanese countryside, across the Kenyan border and between the rows of buildings in the Kakuma Refugee Camp, to finally arrive in Medicine Hat. Now he hopes his family members will be able to follow.

Garang, with the help of the Medicine Hat and Area Refugee Team, a non-profit society comprised of six local churches, is aiming to raise $90,000 to fund the relocation and sponsorship of family still living in the refugee camp.

Garang’s family originates from a village in what was once southern Sudan. His father was the village chief and a prominent figure in the region. The village was greatly affected by conflict between northern and southern opposition groups. In an effort to protect his people, Garang’s father opposed one of the groups’ demands and was killed as a result.

Following his father’s death, Garang, his mother and his siblings knew they would be targeted, too, if they didn’t leave. They were able to escape by walking toward the Kenyan border under the cover of night.

Upon reaching Kenya they entered the Kakuma Refugee Camp, a settlement in the north of the country housing more than 190,000 refugees. Garang spent the next 21 years inside the camp, unable to return to his homeland for fear of being recognized by the individuals who killed his father.

Despite the change that comes over 21 years, Garang was eventually recognized in 2017 while still at the camp. He was attacked with a machete and left critically injured.

Garang was lucky to survive the attack and after spending months recovering, he was finally approved for refugee status by the Canadian government. In 2018, Garang, his wife and his three children came to Medicine Hat, where they have resided ever since.

He says he is grateful to the Canadian government for accepting him and his immediate family, and feels blessed to be living in Medicine Hat with support from community members. MHART – comprised of individuals from Victory Lutheran Church, St. John’s Presbyterian Church, Unity Lutheran Church, Fifth Avenue Memorial United Church, Temple Baptist Church and Westminster United Church – has also worked to support Garang and his family as they adjust to their new life.

Despite having a newfound sense of security, Garang fears for the safety of those who still reside in Kakuma, especially his elderly mother. Not only are they at risk because of their connection to Garang’s father; the government of Kenya announced in March that Kakuma will be closing in July of 2022. When this happens Garang’s family will have nowhere to go, as they are not citizens of Kenya and cannot return to South Sudan.

With MHART’s help, sponsorship can be arranged for six members of Garang’s family; his mother, his niece and four nephews. His niece and nephews are all fluent in English and are eager to join the workforce. Moreover, he feels they will enjoy living in this city, as he does.

“I like Medicine Hat,” Garang told the News. “When I came here, I got good people … I am very happy now. I’m not feeling lonely. I feel like I’m living with my family. That is what I love (about) the people of Medicine Hat.”

As Garang speaks of his family, he shows pictures of them on his phone. He worries for their safety but remains optimistic they will be able to join him soon. Sponsorship costs $15,000 per person but in a release dated Oct. 21, MHART stays one third of their goal has already been met.

For those interested, donations can be made to St. John’s Presbyterian Church. They ask that all donations be clearly market for MHART. Any sum over $25 is eligible for a tax-receipt at year’s end.