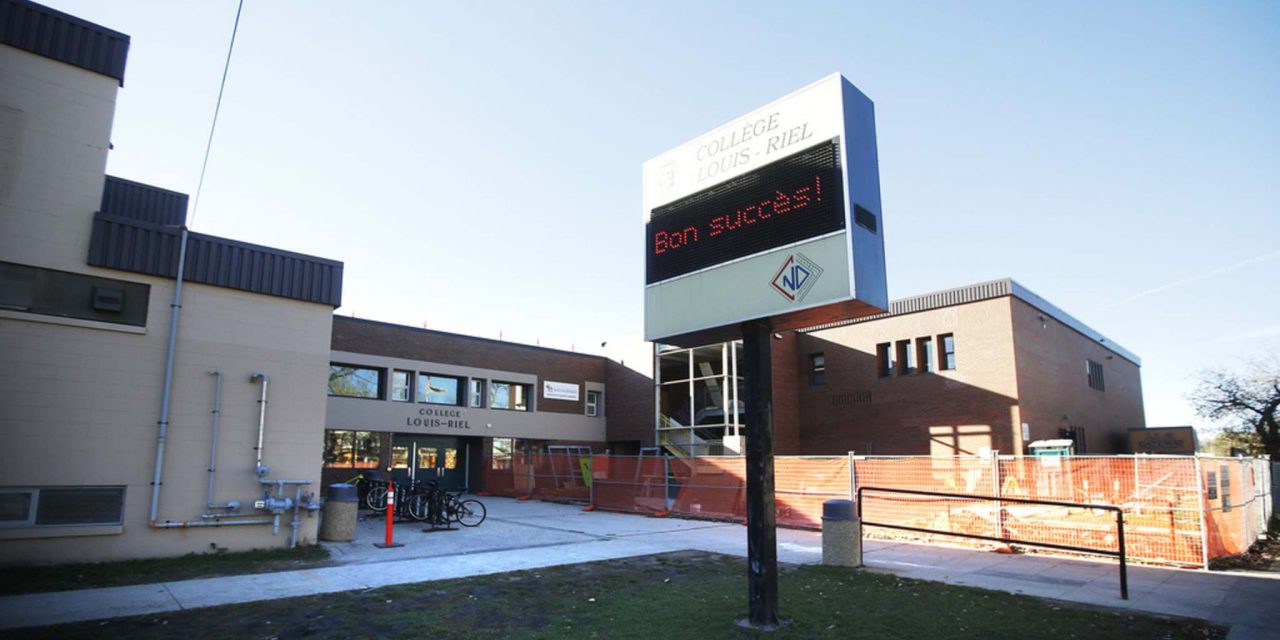 A Winnipeg high school teacher has been put on leave after her use of the N-word sparked a heated debate during a class at Collège Louis-Riel last week and later, a physical altercation between two students.

The Division scolaire franco-manitobaine is investigating a series of incidents, which began Oct. 14, when “students were offended by language used by one of our teachers,” said Louise Legal-Perrin, assistant superintendent.

Calling the events “unfortunate,” Legal-Perrin said the French-language division condemns the use of the N-word in all of its buildings; she said the term can be discussed without saying it in its entirety since it may be present in some educational materials.

A video of the initial incident, which was posted on Snapchat, shows a Black student calling out a white teacher for saying the racial slur during a lesson.

“The minute that word came out of your mouth, you did not respect us at all,” says the Grade 10 student in the clip.

Julie Tuelenake witnessed the situation play out; the 15-year-old was recorded while speaking up when her teacher articulated the word.

The 10th grader indicated her teacher — whom she refers to and knows only as “madame” — was talking about and defending a colleague of hers who had used the N-word in an academic context. Julie said her teacher said the N-word multiple times in describing the situation and refused to acknowledge how inappropriate her behaviour was.

“When a white person says it, they’re insulting me. I felt betrayed. I felt hurt,” said Julie, while on her way to catch the bus home after school Monday.

Not long after the discriminatory term was said, school administration was informed about a conflict that broke out between students inside the St Jean Baptiste Street building.

Parents Contre le Racisme issued a news release late last week to condemn both the teacher’s conduct and the use of the slur in all contexts, citing the term’s ties to a violent and dehumanizing history of slavery, segregation and anti-Black racism in Canada.

“The fact that such an incident is taking place for the umpteenth time at this institution reflects the image of a very comfortable and normalized culture of racism that hurts African-Canadian students, their families and our community,” states the release, which is in French.

Beydi Traore, a father involved with Parents Contre le Racisme, said he worries about the trickle-down impact of teachers using the N-word and how it could result in bullying.

“It’s not good for the well-being of Black students,” said Traore. “This student shouldn’t have to defend herself in front of a teacher.”

Grade 12 student Perlissia Mahoungou said she has witnessed a different high school teacher say the N-word in an academic context in the past.

“We’re kids. We’re supposed to learn from our teachers, our principals. We look up to them, but I don’t see a role model here. I see someone who doesn’t take time to understand what we go through,” said Perlissia, adding she felt hurt when she heard about the latest event.

In her view, Black students should be able to use the N-word at their discretion, but the 17-year-old said it is completely unacceptable for teachers at Collège Louis-Riel — the majority of whom are white — to be vocalizing it.

In order to remedy the situation, she said the staff at her school need to learn it is not acceptable to use the N-word, the principal and teacher involved in the latest situation need to issue an apology to students, and there needs to be better Black history education.

A team of student services personnel, including counsellors, social workers and clinicians, were made available to students Monday.

Legal-Perrin said the DSFM’s hope is to hear out students who were hurt, ensure they feel emotionally and physically safe at school, and ensure they know how-to access resources in the aftermath.

Parents Contre le Racisme is calling for the creation of an anti-racism policy, but the assistant superintendent said it’s too early to commit to doing so since community consultations in the wake of the incident are in the early stages.

“These are very large social issues that we do need to address and we do need to be sensitive to language that we use and that can sometimes be perceived as aggression,” she said. “There’s a lot of learning that we will take away from this situation.”

Legal-Perrin would not say whether the teacher who said the N-word is on paid or unpaid leave.