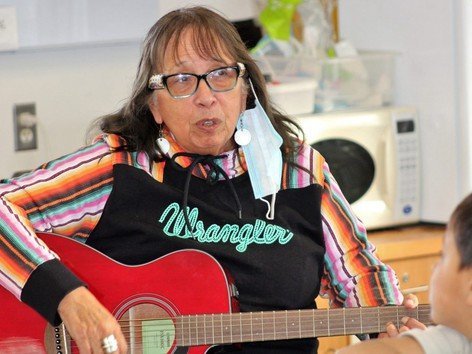 When Donna Pratt was a child living in a residential school, the only way she could ever speak her traditional Dakota language was by looking in a mirror and talking to herself.

“I know how important it is to share the language, because I attended residential school where you wouldn’t dare speak your language around anyone or you would be punished, you had to always speak English,” Pratt said.

“But what I would do when I was by myself is stand in front of a mirror and speak my language and it stayed with me.”

According to Pratt, her parents, who were also residential school survivors, only spoke English when she was growing up, but Pratt said she learned her traditional Dakota language from an aunt who spent time teaching it to her in exchange for Pratt teaching her aunt English.

Pratt knew how to speak the Dakota language when she was taken from her home and forced into a residential school in Dauphin as a child.

Throughout her time in a residential school and beyond, Pratt said she never lost the ability to speak the language, and she is now working to make sure that the Dakota language does not disappear.

Pratt works with youth as a Dakota language teacher at Mahpia Hdega School, a K-8 school on the Dakota Plains Wahpeton Oyate First Nation, a Dakota nation that sits about 20 kilometres southwest of Portage La Prairie in South Central Manitoba.

As a teacher of the language, she said she uses traditional lessons, but also songs and music as a way to share the Dakota language with youth.

Pratt believes it is important to share traditional Indigenous languages with youth as a way to keep those languages alive after the residential school system tried for decades to eradicate them.

“Our traditional Dakota language is considered sacred, so we try and continue and share that language,” Pratt said. “And everyone at the school is working very hard to support what I’m doing, so the whole school and the whole community is really behind this work.

And while Pratt wants to keep the language from dying out, she said she also shares it because it can empower students when they learn about their traditional language and culture.

“It’s not just the language I teach, but the culture and the history,” she said. “And it is the most wonderful feeling when you see them learning the language and then sharing it with others.

“You can see it just boosts their confidence.”

According to Pratt a lot of parents and grandparents in the community cannot speak their traditional Dakota language, so she said when students go home and share it with their families, it is also something that can be beneficial for many in the community.

“A lot of people have lived with all that trauma that came from the residential school system, and losing the language is a big part of that trauma,” she said.

“This is something that is important because it’s a way for all of us to heal.”