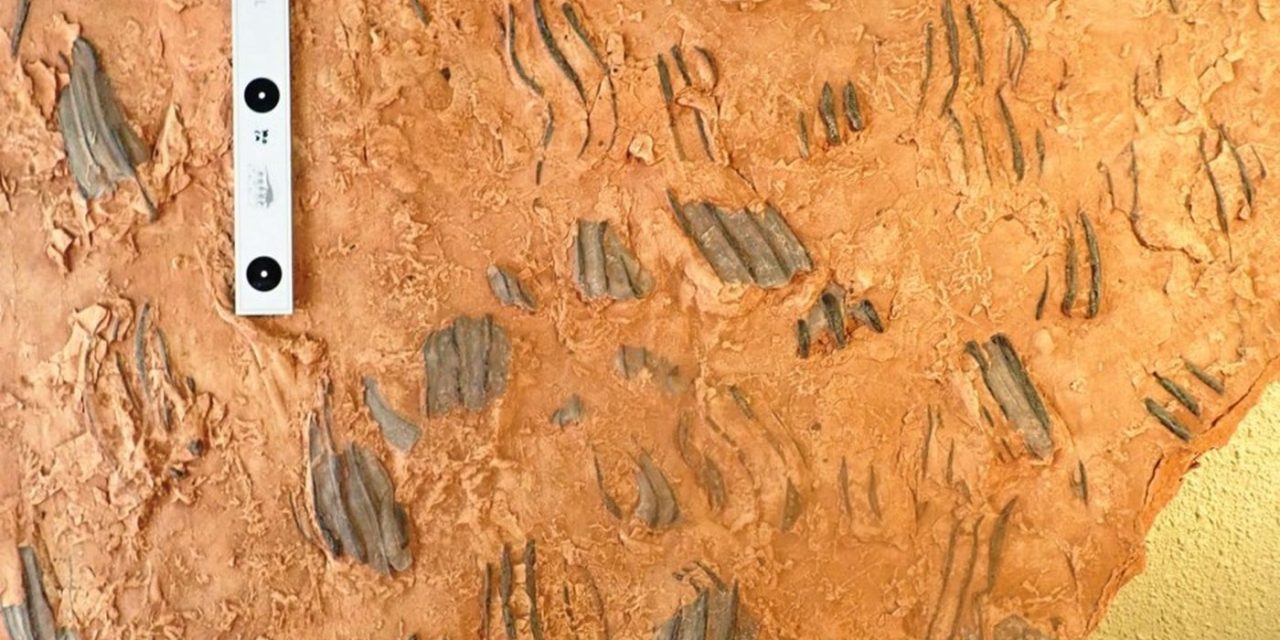 Ancient crocodile swim traces found in Tumbler Ridge half a decade ago continue to contribute to global research of the reptiles, says paleontologist Dr. Charles Helm, who’s currently working on a research paper about the ‘living fossil’ species.

Helm is a founding member of the Tumbler Ridge Museum Foundation, contributing to numerous fossil discoveries in the area, from crocodile and dinosaur tracks, to fish fossils, marine reptile fossils, and more. The crocodile swim traces are believed to be 112 million years old.

“To me, these are the finest examples of that kind of crocodile swim trace that I’ve seen, and they’re very impressive,” said Helm. “Mostly they’re impressions of the claws or the tips of the toes, but there are two or three tail drag impressions as well.”

Helm said the swim traces were used to identify similar swim traces found on the shores of South Africa in 2018, due to their highly distinguishable features and superior preservation.

“They’re the first ever swim traces to be described in Africa, and it’s thanks to what we found here,” said Helm of the Cretaceous-era crocs.

The Tumbler Ridge area and Northern BC remain rich in track ways but poor in bones – a stark contrast to the bone-rich badlands of Alberta, says Helm.

“We are depending almost entirely on tracks and traces, rather than bones, and that’s fairly typical of Northern B.C.,” said Helm. “For example we do have dinosaur bone material here but that’s greatly outnumbered by the dinosaur tracks.”

Museum Manager Zena Conlin says the swim traces are an important part of the Dinosaur Discovery Gallery, and furthers their understanding of Tumbler Ridge’s fossil record.

“It really tells a more global story on the types of environments that they lived in, so we’re expanding the scope of our research and going beyond just focusing on dinosaurs now,” said Conlin. “They weren’t the only beings living in these time periods, these were really diverse ecosystems with lots of animals living in them, and we’ve got evidence of that, which is really the more exciting story.”

Helm said the discovery of the swim traces owe a thanks to resource companies taking an interest and providing the tools to help recover them.

In 2015, when the track were first discovered by local geologist Kevin Sharman at the Quintette Mine, owner Teck Resources built a 200 metre-long road to help safely extract the fossils and bring them to the museum.

“They’ve got my enduring gratitude for that, it’s unparalleled, I think,” said Helm. “I’m not aware of anything like that anywhere else in the world. It’s incredible collaboration between a coal mining company and a museum.”