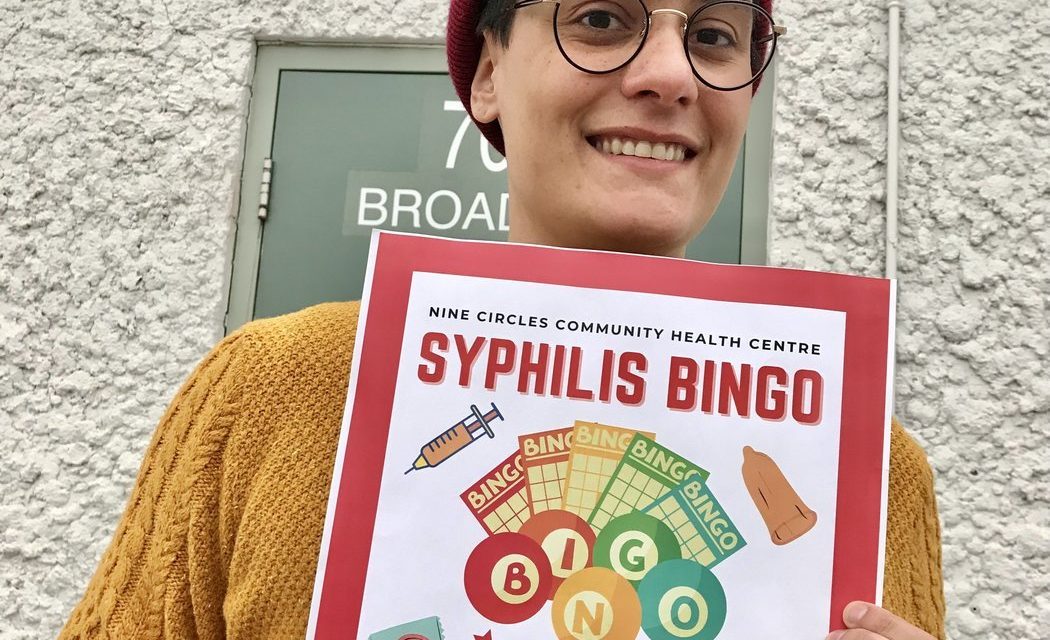 A new Nine Circles Community Health Centre pilot project is handing out bingo cards and calling out syphilis factoids to educate people in Winnipeg about the sexually transmitted infection. Black-out bingo games with prizes for up to 11 participants at a time are being run by trained peer educators at agencies that serve vulnerable populations.

“The bingo caller would call out something like ‘some people with syphilis may have a body rash, but not everyone, does anybody have a hand with red spots on it?’ and then they would put their little bingo chip on the card if they do,” said Chance Dupuis, a health educator at Nine Circles. The bingo cards also include affirming messages like “regular STI checks are part of caring for yourself” and “syphilis doesn’t make you less sexy.”

The original idea to promote syphilis awareness, testing and treatment is timely.

“It’s in response to the rising cases of syphilis, especially in Manitoba. We’re experiencing a pretty huge outbreak right now, but good thing is it’s easy to treat,” Dupuis said.

He says Nine Circles is “definitely seeing an increase in syphilis…it’s been seen across all the community clinics.”

Syphilis infections in Winnipeg spiked from 118 in 2017 to about 1,000 in 2019, and with the increase came the return of congenital syphilis in newborns, which had not been seen in the province for decades.

Dupuis says the cure is quick.

“Syphilis is super-easy to treat, you know, it’s a shot. It’s definitely not a scary thing. It’s penicillin, and if you are allergic to penicillin there’s other options.”

“It’s really tricky because sometimes syphilis can have no symptoms. Even in the early stage, the chancres (sores) that do occur maybe be unnoticeable,” Dupuis said.

He says anyone who is sexually active should be tested. Testing is non-invasive and can be done by a family doctor or at any community health centre like Nine Circles.

But, what about bingo for other sexually transmitted and blood borne infections (STTBIs)? Dupuis says the question has come up a lot.

“We are in the works of doing an everyday sexual health-style bingo…all (STBBIs) deserve to be known about as well as syphilis, so there is something in the works.”

This item is reprinted with permission from The Leaf, Winnipeg, Manitoba.