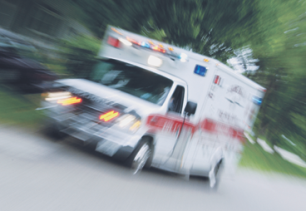 As a result, communities will go into code red, meaning there are no ambulances left because they are so busy. Often big cities will use their ambulance services first and then the closest ambulance will be left to respond, which could be a vehicle from another municipality,

“You start drawing in the bedroom communities that are outside the metros.”

As the calls keep coming in, ambulances are drawn in from Morivnille or Westlock to service the big cities, leaving small towns with an ambulance far away.

“In the town of Coledale, which is outside of Lethbridge, an ambulance that was doing a call on the weekend, its home base was Clairsholm, which is 100 kilometres away,” Parker said.

Parker said Hardisty has been without an ambulance for 24 days because they don’t have the staff to keep a truck going.

The information Parker has is crowd-sourced from the members who staff the ambulances who are getting frustrated with the lack of coverage in the province. Parker vets the information internally before sending out information on social media to alert the public to code-red situations.

In the community of Warner in southern Alberta, the chief administrative officer Jon Hood said they have been struggling with ambulance response times.

Under the previous system of emergency services in the province, the town and surrounding area had five ambulances run and paid for municipally to respond to emergencies.

The province took over the ambulance services in the area and they went from five ambulances to two.

“When they are gone with patients or doing transfers or on a call there are no backups,” Hood said.

An ambulance will have to be called in from another community, such as Lethbridge or Coaldale, which are 45 minutes to an hour away.

Now to fill the hole in services volunteer fire departments are being tasked as first responders when the ambulances are not available, although their trucks have no transport capacity and are left to tend to patients on the scene rather than take them to get help.

“They are all dedicated volunteers, but now some of these volunteers are experiencing death for the first time,” Hood said.

“They may be doing CPR on someone who has had a stroke and the ambulance is 45 minutes away and they end up watching the person die.”

And in a small community such as Warner, they likely knew the patient they were working on, making the situation even more difficult.

While the firefighters are working on patients, they have no idea how far an ambulance is away from the scene, as the new dispatch and communication system doesn’t allow for them to chat with those on the provincial dispatch system.

Across the province, municipalities are struggling with the recent changes to the emergency services dispatch program.

Randy Bryksa, associate executive director with EMS Operations, told council the trend is continuing and said he doesn’t believe it is specifically isolated to COVID-19, bur rather due to a new norm.

Wait times in Airdrie increased from 2019 to 2021 from an average of eight minutes and five seconds per response, to nine minutes and 45 seconds, representing an increase of 21 per cent.

Communities in northern Alberta are also feeling the pinch. For a short period on Oct. 5 there were no ambulances available in the Westlock and Barrhead region.

Alberta Health Services could not be reached for comment before press time.