Used farm equipment woes not ‘doomsday by any stretch’ 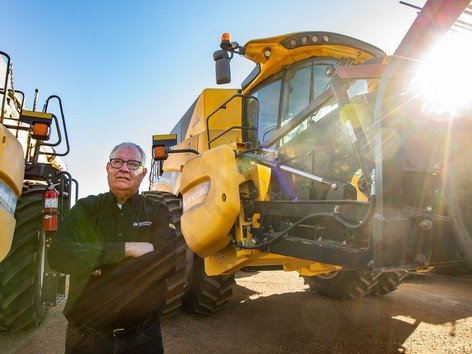 The small farms that buy equipment from Doug Warrener are growing fewer and farther apart.

The Saskatoon regional manager of Robertson Implements agrees with a recent policy paper suggesting that as farms grows fewer and larger, there won’t be as many small and mid-sized operations to buy their used equipment — which means less recovered money for the bigger operations to spend on improvements.

However, he’s one of the equipment dealers who question whether it’s really a crisis in the making.

“Is marketing used equipment a challenge for all dealers? That’s for sure,” Warrener said.

There’s fewer 1,500- to-2,000 acre farms to buy new equipment, and most used equipment is only good for three trades. Warrener had strong sales — new and used — over the years, but some farmers can’t keep buying new, he noted.

“They’re saying, ‘In my operation, I’d be better off to consider a good used piece of equipment than buying new.’ “

A recent Agri-Food Economic Systems policy paper on Canadian agriculture claimed the growth of large farms is leaving smaller ones behind, making it harder to sell used machinery in a process that “threatens to cannibalize itself, eventually slowing down with the decline in residual demand for assets.”

“I don’t think that the largest farms are dependent on being able to sell that used machinery as a huge part of their growth and survival,” he said.

“I also think machinery (is) evolving more into tractors and equipment as a service (with accompanying technology) rather than just thinking of it as an asset.”

It could be a mistake to think of farm costs as a “U” where the smallest and largest farms pay the highest costs. It may be closer to an “L” where the biggest farms maintain relatively low cost operations, Skolrud said.

Eric Smith, a sales associate at Combine World near Saskatoon, said he has noticed a flood of used stock as commercial or investment farming operations take short leases on equipment from manufacturers that later end up on dealers’ lots.

Dealers have consigned a significant part of that equipment to auction because they can’t move the stock. However, some mid-sized farmers could use a combine or tractor for up to seven years, while larger operations may be turning over equipment up to three times during that period, he said.

Used equipment sales have been slower recently due to drought, but that’s an outlier that “wouldn’t be doomsday by any stretch,” he added.

A Canadian Centre for Policy Alternatives report last year found 38 per cent of the farmland is operated and controlled by eight per cent of Saskatchewan farms, or 2,433 operations.

Looking at the growth of big farms for the first time may lead to the conclusion that “the world’s changing and these big farms aren’t going to have a place to sell things,” said Richard Gray, an agricultural economics professor at the University of Saskatchewan.

Grain farms have increased in size by about 1.7 per cent every year for almost a century, but that would only be cause for concern if the number of farms was dropping by 10 per cent or their size was growing by 10 per cent, Gray said.

“There’s no evidence that what’s happened in the past has ruined agriculture,” he said.

U of S agricultural economics professor Eric Micheels said it’s a question for politicians and policy-makers about whether society needs more or fewer businesses.

He said the paper may be warning about the sector hollowing out mid-sized farms, but he’s not sure what society’s response to that should be — though the current climate can make it difficult for younger would-be farmers to enter the industry without help.

That same thought is on Doug Warrener’s mind as he notices his clientele change over the years.

“If you’re a young farmer looking to enter the game and borrow to buy a parcel of land, it just doesn’t pencil out with today’s land values.”