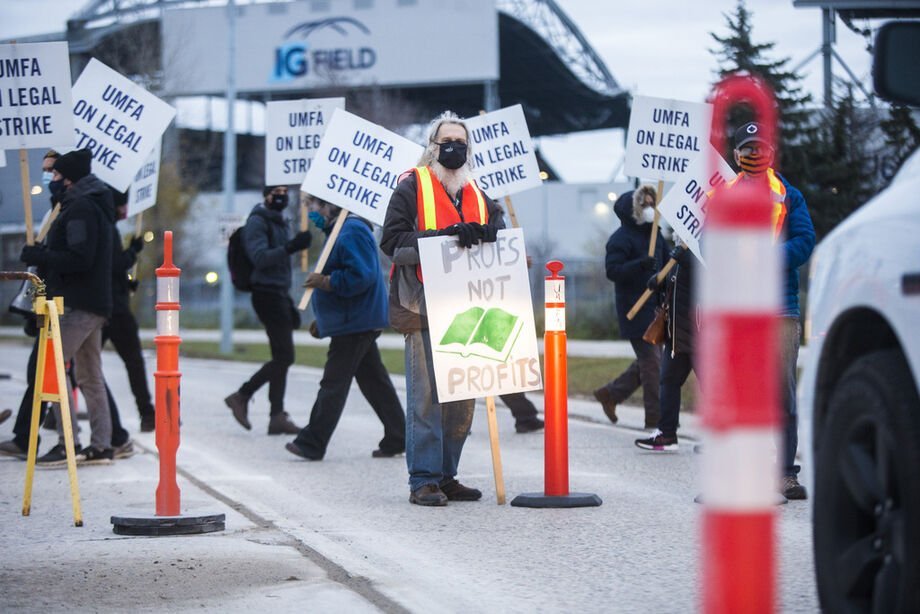 Quiet campuses and COVID-19 concerns have forced academics at the University of Manitoba to get creative by taking job action online amid stalled wage negotiations.

In addition to traditional strike practices, such as setting up a physical picket line with signs, chants and marches, faculty members have taken to social media to participate in “virtual pickets” over the last week.

“More members are involved in our job action than ever before. We have not only in-person picket lines like we did in 2016 and in 1995, but we also have a whole team of virtual picketers because of the pandemic,” said Orvie Dingwall, president of the union, on the first day of the strike, Nov. 2.

Asked about what the latter would entail, Dingwall admitted that — given it is a new concept created out of necessity — virtual events would evolve.

“You’ll have to stay tuned as we figure this out,” she added.

Since then, striking faculty members and their supporters have been tagging politicians and the U of M in posts on social media in droves to create awareness about the job action. Others have created and shared infographics, memes, and poems.

Amy Farrell, an assistant professor of education, has designed memes with cats on them. Farrell has, to date, been picketing strictly online because of her concerns about the growing number of COVID-19 cases in the province.

“We have to be unique and innovative,” she said. “While new, I think this is what a lot of strikes might look like in the future: having this combination of picketing in-person and also the virtual picketing as well, because there’s so much more reach online.”

The posts often poke fun at the university’s wage offers, rising tuition rates during remote learning, and the province’s alleged interference in bargaining — one of faculty members’ key arguments.

The union, which represents upwards of 1,200 professors, instructors and librarians under the UMFA banner, has repeatedly raised concerns about U of M’s low wages impeding retention and recruitment. A provincial mandate on salary hikes that was handed to the U of M is only complicating matters by interfering in negotiations, the faculty association says.

The province, however, continues to stand by its view that wage guidelines are not uncommon because of its role as a key post-secondary funder and steward of public funds.

Nothing can replace the visibility of blocking a university entrance with signs, said David Camfield, an associate professor of labour studies, who is currently on strike. But Camfield said the virtual picket model allows all unions to expand their repertoires.

“Some unions have more members who are more comfortable working in a virtual way than others,” he said. “It certainly creates additional flexibility and additional ways for people to participate.”