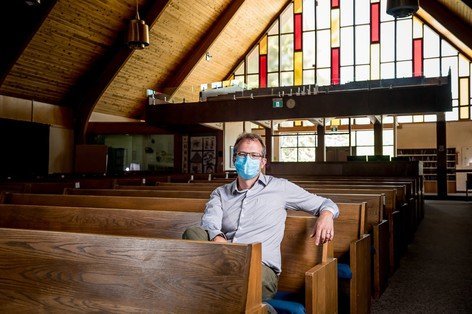 A Steinbach pastor who has been working to get the word out about the importance of vaccines says he is becoming increasingly alarmed by the aggressive and violent rhetoric and behaviours coming out of Southeastern Manitoba when it comes to COVID-19 related information, current health orders and vaccine mandates.

Kyle Penner is a pastor at Steinbach’s Grace Mennonite Church and has also been working as part of a provincial volunteer advisory committee tasked with encouraging vaccine uptake in the province.

Penner took to his Twitter account on Tuesday and spoke about what he said is increasingly violent and dangerous rhetoric and behaviours that he and others have seen or heard about in recent days and weeks.

“The frustration in, and about, Southern Health, is real. Predictably, the violent rhetoric is also on the rise, and unfortunately, so are a few violent incidents,” Penner posted Tuesday on Twitter.

While speaking to the Winnipeg Sun on Wednesday, Penner said he would not give specifics on recent violent incidents he has heard about or seen because he wants to respect the privacy of those who have been impacted, but he said he believes the anger in Steinbach and the surrounding areas is continuing to grow.

“I am hearing more and more about violent incidents and arguments,” Penner said. “And of course we can all see the rhetoric and the anger and the frustration growing on social media, so that is something that is out there for everyone to see, and it’s growing.”

Penner said that lately he believes what has been driving a lot of the anger and violent rhetoric is the emergence of social media groups and pages created specifically for the spreading of anti-vaccine and anti-health order messages.

“Social media has the wonderful gift of connecting us, but it also has the curse of turning us into mobs, and what often happens is that online mobs slowly turn into real-life mobs,” Penner said.

“I’m on team vaccine clearly, but I am working very hard to not vilify those who are not vaccinated and to have them understand that we are not enemies,” Penner said. “We are friends and neighbours and coworkers and family, so we have to figure out ways to work well and live well together.”

Penner said he has been relieved and even somewhat surprised that while being part of the vaccine advisory committee he has not received any messages that he would perceive as threats.

“I have received no violent threats and I am grateful for that. I was prepared for something like that but it hasn’t happened, and if it does I would go directly to the police,” he said.

And while Penner has not received anything that he would consider a threat, a Morden respiratory therapist who works in the Southern Health region stated on his Twitter account this week that he has filed a police report after threats of violence were made towards him on social media not long after he was featured in a Winnipeg Sun article which quoted some of his comments on COVID-19 misinformation.

RCMP spokesperson Paul Manaigre said in an email that RCMP have so far not seen any trends that would lead them to believe that violent incidents are on the rise in the province specifically because of COVID-19 related issues, but he said police will take those kinds of calls very seriously when and if they are received.

“We do respond to the odd complaint that we want to make sure doesn’t escalate to the point of a criminal offence. We continue to educate those, and if needed, lay charges on a case by case basis on any complaints we receive,” Manaigre said.

“The Manitoba RCMP takes these types of complaints seriously and will fully investigate and, if applicable, will hold those accountable for their actions.

“We understand some of the pressures people may be feeling at this time, but to threaten or post threats of possible harm onto others cannot be tolerated, and we are asking anyone who believes that they may have been a victim of, or may have been witness to these threats to contact your local police agency immediately.”