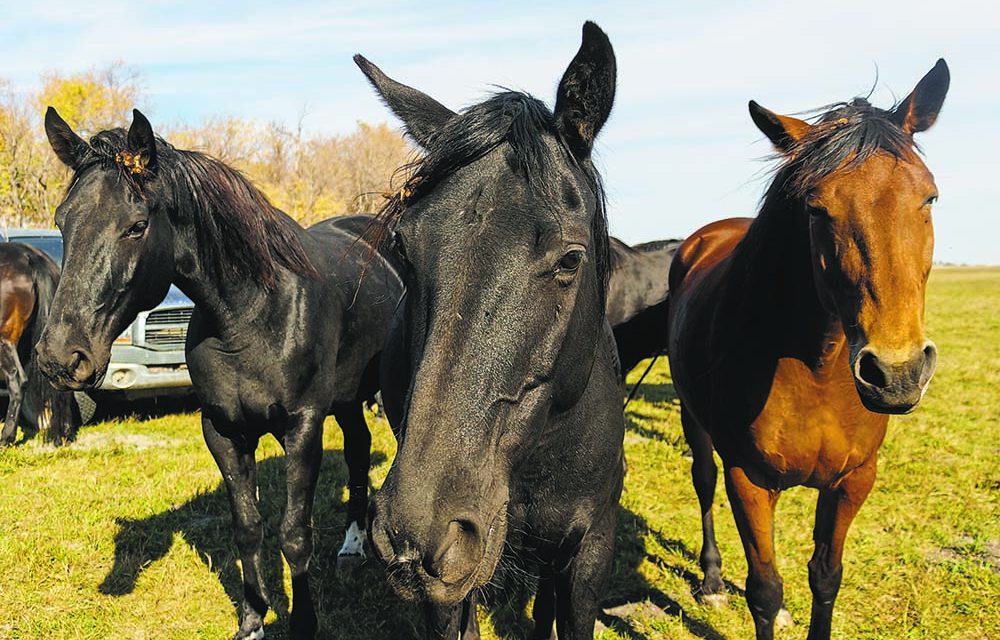 LENORE — Lighting up the screen with local talent, a Lenore horse breeder helped co-ordinate and cast four-legged actors for the new CBC  drama series “The Porter.”

Ravine Ranch Sport Horses owner Scott  King is a veteran of the film industry and grew up surrounded by horses  on his family farm. His latest project is “The Porter,” for which he  served as the animal co-ordinator, drawing on his film and horsemanship  experience.

The TV series tells the story of the fight for equal  rights in the train industry and the establishment of the first major  international union for Black workers across the Canada-United States  border.

“I think it really kind of deals with a lot of the racial  stuff that people are talking and thinking about a lot these days. It’s  timely for a show like this to come out,” King said.

The series is  set in the 1920s, when the main source of transportation was largely  horse-driven carriages, buggies and wagons. King added horses were  essential in helping to pull resources to and from train stations at  this time.

During the shoot, King was tasked with building teams of horses to pull wagons and buggies on set.

He  carefully selected each horse that appears in the TV series, drawing on  equines that had experience pulling different forms of transportation.

“I  actually had a few local guys that have teams and we put together a  good group of horses that worked really well for us,” King said.

Working  on a set is a challenging skill for a horse, and the animals need to be  calm and patient. King often finds out who the true movie stars are on  set because when the animals are sitting and waiting for the call to  action, there can be a build of pressure that affects a horse’s ability  to perform.

“The horses feel it big time. It’s almost similar to  being in a rodeo and sitting in the box ready to go and then just  waiting. That horse knows its job and they’re waiting to go,” King said.  “You need to have a horse that is calm and easy-going and will stand  for a long time.”

King was on set for 15 shoot days, but finding  and recruiting animals for the show kept him busy the entire summer.  He worked on “The Porter” from June until mid-August. He travelled  between the family ranch, where the horses stayed, and the set in  Winnipeg.

“Horses are pretty point and shoot. They know their jobs  and for the most part, they’re pretty easy. We have more human failure  than we do horse failure,” King said with a chuckle.

He scouted  out a selection of horses from Westman, including quarter horses,  standardbred horses and some Percheron teams experienced in pulling  wagons.

As part of his work on “The Porter,” King also found and  secured all the wagons used on set, housing about 12 different wagons  used in different scenes and areas of the shoot. King found, rented and  hauled the set pieces down to Winnipeg for storage.

“The  Porter” is the largest job King has taken on to date on his own, as most  projects he has been involved with have typically been completed in one  or two days.

It was a complicated job securing the wagon, horses  and experienced riders. For every actor he recruited, King had to take  photos to ensure they had the right look for the TV show and then help  get them costumed.

“There’s actually quite a number of local people here that I used that will be in the show. It’s exciting,” he said.

King  does not appear on a camera, he said, because working as animal  co-ordinator kept him busy on set ensuring the horses were groomed and  tacked up; the wagons were ready to roll in the right place; and actors  working with the horses were prepared to respond to their cues.

It was a fun experience on set and King praised Arnold Pinnock, creator of “The Porter,” for the enthusiasm he brought to set.

King said Pinnock “really poured his heart and soul into” the creation of the series.

“It’s  an important story to tell. The way that they focused on it and the job  that they did was inspiring to watch. It was nice to be a part of it,”  he said.

King has appeared in various film projects over the year,  spending time in Vancouver and Victoria in B.C., Alberta, and France as  an actor and stuntman.

He lived in Paris for two years while  working on Buffalo Bill’s Wildwest Show in Disneyland, before moving to  Alberta where he appeared in “Heartland,” “Hell on Wheels” and some  independent films.

His time in Alberta opened the door to working with animals on set.

When he moved back to Manitoba, King said, he purchased Ravine Ranch Sport Horses six years ago from his parents.

Since then, he has been involved with shows and films including “The Last Ship” and “How it Ends.”

“You  search the whole world thinking about what you want to do, and you get  out and explore and find new things, and I wouldn’t trade any of it —  it’s just funny that I end up back home here,” King said with a grin. “You go all over the world and end up finding everything you’re looking for right here at home.”