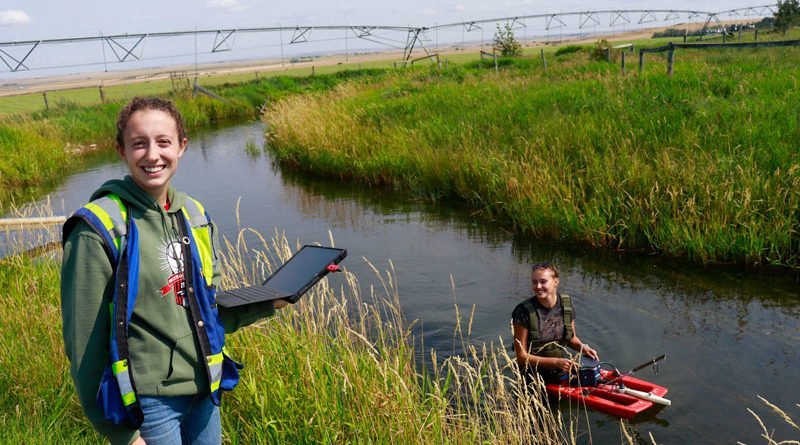 The Western Irrigation District (WID) is reporting optimism following their invasive species eradication efforts over the summer and wants to continue to raise public awareness about the issue of invasive species in Wheatland County.

“It’s an unfortunate annual … and constant … part of our work for the WID. We’re making progress on the invasive species every year,” said Brian Sander, water master for the WID.

He explained that the organization has been working regularly with Wheatland County as well as Ducks Unlimited to contain invasive and noxious species, as well as to rehabilitate damaged natural areas.

Among the invasive species being addressed are flowering rush, purple loosestrife and zebra mussels.

“We’re about eight years into the purple loosestrife control project, so that’s a really good community … all together controlling this one noxious invasive species,” said Sander.

“We continue to battle flowering rush … it is quite laborious. We found the best way economically and control-wise is to be delicate and remove these plants by hand so as to not let root cuttings and tubers escape.”

Invasive weeds have been identified in Wheatland County, particularly along waterways where conditions are favourable for the plants to flourish, especially where there is presence of fertilizer runoff from residential areas.

This year, the WID had the assistance of two post-secondary environmental science students to assist in their efforts. The team reportedly removed around 300 flowering rush specimens and 50 purple loosestrife from the Wheatland County and Chestermere areas.

“The removal of invasive species is an important aspect in maintaining habitats as they often displace native vegetation through competition for nutrients and space,” said Rachel Davey, a student at Mount Royal University who aided the WID over the summer season.

“In the WID, invasive species such as flowering rush also will disrupt the flow of water and can increase sedimentation, negatively impacting the overall water quality.”

Sander added the WID will be continuing to monitor for and harvest invasive species for destruction, with a long-term goal being to remove them completely from the area.

“I have a lot of passion for controlling these invasive species. They have a place in the world, but it’s not in our geographical location,” said Sander.

Regarding public awareness, he advises people to be aware of invasive species as they are a very real issue. Flowering rush for example, tends to be a common seed to purchase in local garden stores because it is a very hardy plant that blooms a pretty flower.

To help aid in keeping Alberta largely free of zebra mussels, stations are being installed locally for checks to be made to watercraft before and after use in local waterways to control and prevent the spread of species such as the zebra mussel among other invasive aquatic species.