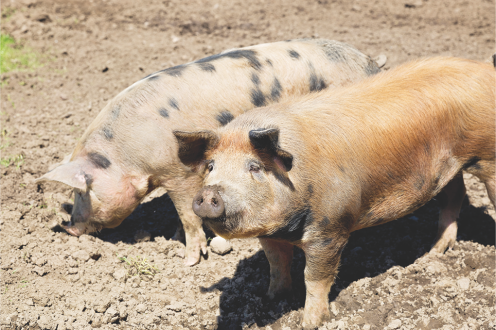 The Westman Naturalists hosted University of Saskatchewan Prof. Ryan Brook on Feb. 18 for a special Zoom talk about the potential  environmental devastation posed by the spread of invasive wild pig  species in Manitoba.

During the webinar, “Ecology of Invasive Wild Pigs on the  Canadian Prairie,” Brook provided insights into his research of tracking  the rapid spread of invasive wild pigs in Spruce Woods and across  Canada.

“There are no native pigs in Canada, so anything you see  running around that looks like a pig and oinks like a pig is indeed  introduced, and indeed invasive,” Brook said.

At the industry’s height, Statistics Canada reported 500 farms and more than 32,000 animals were in the country, with many located in the  Prairies.

“A lot of work, time and energy were put into bringing these  wild boar, domestic wild boar, to be raised on primarily meat farms,”  Brook said. “Manitoba did ban these quite some time ago, but other  provinces have had and still have these so-called high fence shoot  operations.”

The boars were imported from Europe and raised on farms, but  the market never really took off, and the growth of the industry proved  to be unsustainable.

The first documented cases of pigs escaping were recorded in  1995. The animals finding their way into the wild was magnified in 2001  when the wild boar market peaked, and many farmers cut the fence and let  them go assuming they would be unable to survive the harsh Prairie  winters.

“We’ve documented cases all across Canada of cutting fences and  letting dozens and in some cases more than 200 at a time-released out  onto the landscape,” Brook said. “If you ever do have one cross your  path, you know for sure that it came from a farm.”

There has been an exponential increase in wild pigs. They first  became visible around 2010 and have continued to spread. There were  less than 500 reported in 2010, but by 2020 reported sightings had  increased to more than 2,000.

In Canada, 58 per cent of occurrences of wild pigs have been  reported in the last five years, Brook added, noting a proper count of  the animals has not yet been undertaken in Canada.

The highest reported pig counts are in Saskatchewan and  Manitoba, with the greatest number of wild pigs located along the  provinces’ borders.

Brook noted the pigs have been spotted in Spruce Woods, Deloraine, Boissevain, the Brandon Hills and Turtle Mountains.

It is difficult to estimate the true number of wild pigs in the  province because they are hard to spot, and typically the only telltale  signs they are present in an ecosystem is the trail of destruction they  leave in their wake.

The pigs destroy the ecosystem by digging and foraging. Brook  described the animals as a rototiller when looking at the damage they  create.

“We often refer to these things as an ecological train wreck.  They’re quite damaging and really, really bad in all sorts of ways,”  Brook said. “They literally feed on everything — they eat all manner of  vegetation and roots and insects and fish when they can get them. They  are truly omnivorous and eat just about anything and live in any kind of  habitat.”

In the United States alone, the invasive species creates about US$2.5 billion in crop damage each year.

Brook noted they have done collaring, releasing a pig and  tracking its movements via GPS satellite in Manitoba and Saskatchewan.  Cameras have also been placed in Spruce Woods and the Turtle Mountains,  and citizen scientists send in photos of the pigs for research.

Manitoba has been very proactive when it comes to controlling the spread of animals.

“Very early on, I believe it was ’91, Manitoba declared the  whole province a wild boar control zone. They were going out and  removing wild pigs,” Brook said. “That’s very notable in the whole  context of this that Manitoba should be given credit for getting on that  early and being very, very proactive.”

However, as of 2022 they have been singularly unsuccessful in  eradicating the animals for any area, Brook said. At this point, the  window on eradication of the species in Canada is closing if not already  shut.

“If Canada gets real serious, real fast and starts to remove  these pigs, then I think we could get ahead of them and we could  potentially remove them. We’ve passed the point of eradication we’ve  missed the window,” Brook said. “There are big areas of Manitoba. For  example, if you said we want to make everything east of Winnipeg  pig-free I would say absolutely, highly doable.”

In the last two years, there has been a transformation in  approaching the wild pigs, and the animals are being recognized as a  threat — but there is an increasingly rising cost to get ahead of their  spread.

One of the more productive options is to find areas of focus  for eradication with fewer pigs, he said, but regions like Spruce Woods  would be a bigger undertaking.

As of now, there is no provincial strategy for the control of  wild pigs in Saskatchewan or Manitoba, and there is no national strategy  to control them from expanding out of control. Brook estimates the  overall spread of the pigs currently occupies one million square  kilometres.

There are options to control the spread of the animals,  including sports hunting, trapping and collaring. Brook said a  combination of bait trapping and tracing a “Judas Pig” to a large  sounder to eradicate the group are some of the more productive options.

“We simply can’t barbecue our way out of a wild pig problem,”  Brook said. “The cornerstone with all invasive species is … you have to  be quick and you have to be aggressive in your response.”

This item is reprinted with permission from Brandon Sun, Manitoba. See article HERE.