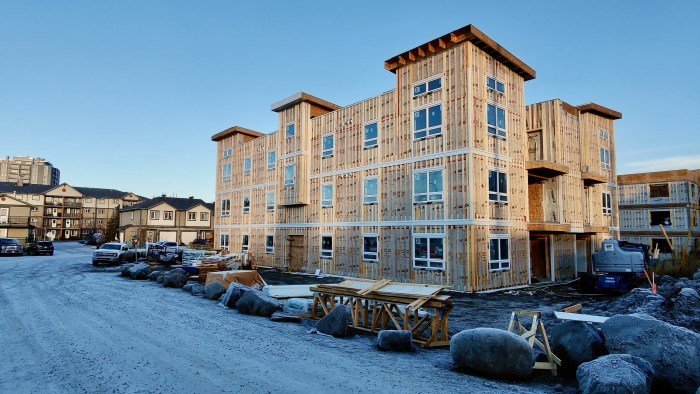 Yellowknife house prices rose to an all-time high as the pandemic made the Northwest Territories’ housing problems even worse in 2020, a new report states.

The N.W.T. section of the report focuses primarily on Yellowknife but does offer some broader outlook on the territory’s market as a whole.

Public housing is excluded from the statistics.

Analyst Michael Mak, who studied the N.W.T. for the report, said the pandemic had a “quite significant impact” on the housing landscape.

“Combined with existing housing pressures in the territory, it has really magnified those issues,” Mak said.

“In the resale market in the Northwest Territories, sales have reached quarterly all-time highs and average home prices have also reached an all-time high.”

Since late 2019, the N.W.T. government has acknowledged the territory is in a broad and lasting housing crisis. The report gives little sign of that changing, stating the cost of both owning and renting in the N.W.T. is rising.

The average Yellowknife home price – for all types of home – rose to just under $486,000 in the second quarter of 2021, an all-time high in Yellowknife.

“Year-over-year, the average sales price has increased by 22 per cent in Yellowknife, adding to affordability challenges,” the report said.

The number of available market rental units in Yellowknife decreased although demand remained constant throughout 2020. Private apartments had a 4.1 per cent vacancy rate in 2019 that lowered to 3.6 per cent in 2020.

The median rent payment increased by 2.2 per cent.

“There isn’t a lot of supply in Yellowknife, and also there’s not a lot of new supply,” Mak said of the city’s rental market.

Only 10 new rental units were completed in most of 2020 and 2021, the report stated. Two in every three city apartments are more than 20 years old. Of those, a third were built before 1979.

Meanwhile, though the N.W.T.’s population did not increase overall, the number of seniors did.

“With this increasing seniors’ population,” said Mak, “it’s completely plausible that … the segment of the population that experiences affordability issues, adequacy issues and all that will increase in the Northwest Territories if supply or adequate supply isn’t provided.

“The seniors’ population is one of the most vulnerable populations in housing issues.”

Building more housing in the North was already challenging, but the pandemic made things even harder.

The CMHC said the closure of Canadian lumber mills as a COVID-19 preventative measure disrupted supply and increased the price of lumber.

Even so, new construction in Yellowknife increased in 2020. Work on 54 housing units began.

In 2021, housing projects started in Yellowknife have shifted toward apartments and condos, with 65 such units under construction in the second quarter of this year.

“This is the first significant construction of new apartments since the second quarter of 2017,” the CMHC’s report said.

“Currently, these units are the only type of housing under construction in Yellowknife. This may help alleviate affordability challenges by providing lower-priced options in the future.”